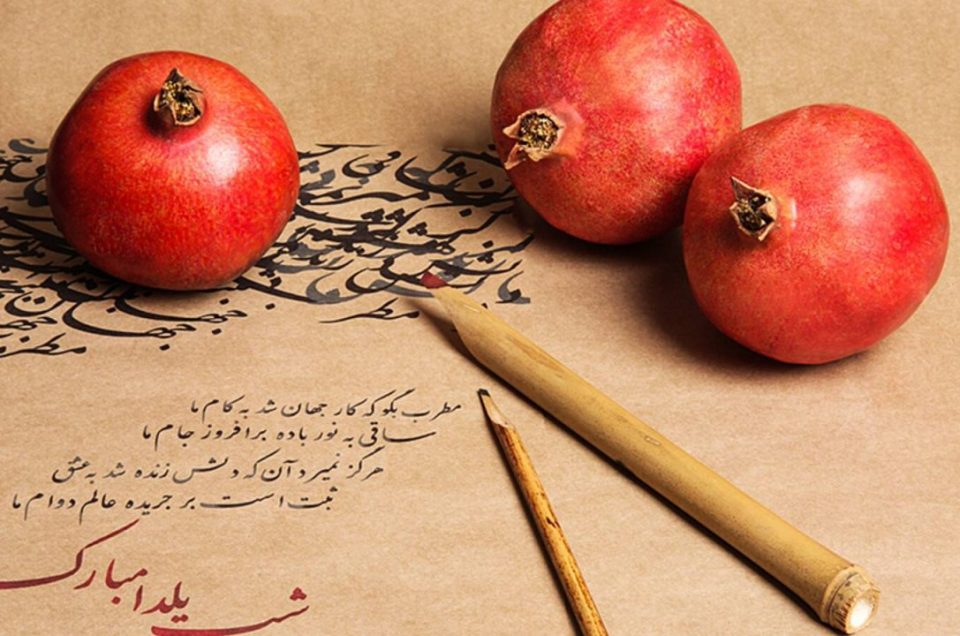 Yalda Night In Iran has been celebrated by Iranians since a few thousand years ago in friendly and family-based gatherings.
Yalda Night ( Shab-e Yalda ) is the last night of autumn, the longest and darkest night of the year; It is also a point when the days begin to stretch in the northern hemisphere and Yalda is a winter solstice celebration so it refers also to the night of forty ( Shab-e Chelleh).

In ancient times people considered winter to consist of two parts, each part took 40 nights long, Shab-e Chelleh was the beginning of the big Chelleh which was actual winter.

Yalda Night is celebrated between the sunset of the last day of autumn and the sunrise of the first day of winter. In ancient Persian legacy, “Yalda” is not just a festival, but it is also a symbol of brightness and light.

It is a big reason that gets all family members, friends, and relatives to gather together and create joyful moments throughout the night.

For this ancient celebration to be preserved and promoted widely, in 2009 Yalda night, with nearly eight thousand years of antiquity, was documented as an IRANIAN SPIRITUAL HERITAGE.

Rebirth of the Sun

The word “Yalda” means “birth” and “birthday”. Ancient Iranians believed that on the day after Yalda Night, when the sun rises on the first day of winter, the days start to stretch and the sunlight begins to lengthen, They called the end of autumn and beginning of winter ”The sun’s birthday”, the advent of Mithra the goddess of light and they widely celebrated it. 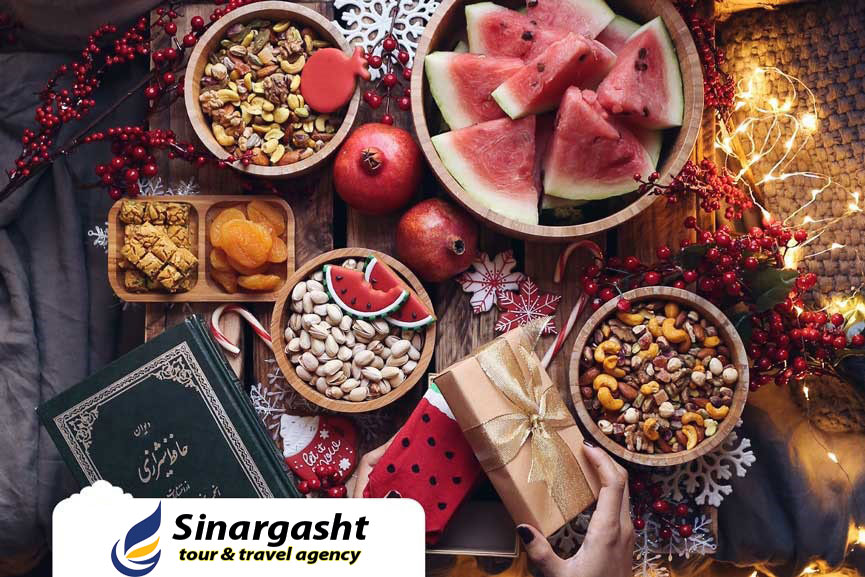 Yalda Night celebration is an ancient tradition. In the past people who lived by farming and agricultural activities, gradually realized that it would be a great idea to set their routine works and living activities based on the Sun’s rotation and seasonal changes; In fact, with their own experiences they figured out that in some seasons, days become very long.

They realized that they could make complete use of Sunlight and longer daylight in carrying out their activities, to their benefit. During ancient times, Iranians discovered the fact that the last day of autumn is the shortest day of the year, and immediately afterward, the upcoming days will gradually become longer.

In a way, they named the longest night of the year the “Sun’s birth night” which reminds us of the victory of brightness (Goodness) over darkness (Demon/Ahriman).

Subsequently, the belief that it refers to the Sunlight and brightness as a symbol of goodness and the darkness of the Night as a symbol of oppression and demon came into existence; and there is still a constant conflict between them.

In every city of Iran, Yalda Night’s table is set following the local fruits and meals of that city; however, special nuts, watermelon, pomegranate, and sweets which are the symbols of blessing, health, wellness, and happiness, are common members of Yalda night table setting, throughout Iran.

Watermelon and pomegranate represent the Sun because of their red colors. Special nuts with nutritious characteristics served during the Yalda Night are supposed to entertain the guests during the party.

Drinking tea and having various local sweetmeats will surely strengthen the joyfulness of this celebration. 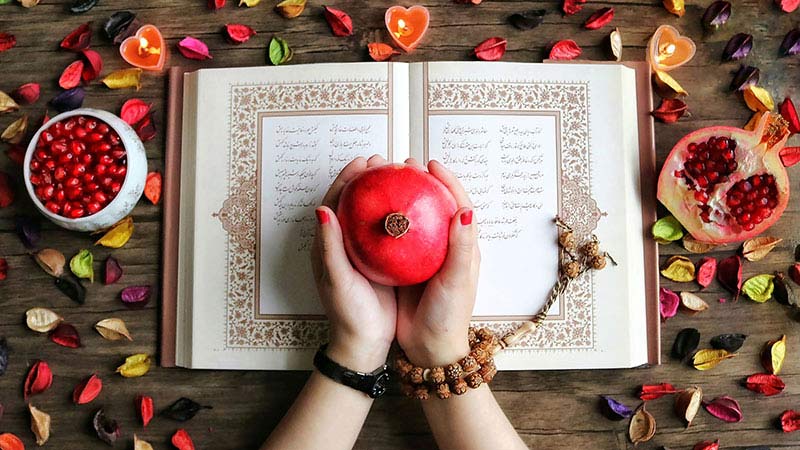 The components of Yalda night, grace, and epic

Alongside all these delicious meals, Divan-e-Hafez (Hafez Book ) and Shahnameh ( Kings Letter ) are dominant members of this table.

Divan-e-Hafez (Hafez Book) is a precious collection of Persian poems , composed by the most popular Persian poet, known as Hafez.

Hafez’s poems are considered to be sacred to most of the Iranian people, and at Yalda Night, they usually use Divan-e-Hafez for fortune telling which is called “Faal-e-Hafez”.

During this divination process, before anything else people make a heart wish, then they open the Divan-e-Hafez book on a very random page, read the poem on that page and interpret its meaning.

They believe that this poem can be used as a foreteller. Shahnameh (kings Letters ) is a precious collection of ancient myths and legends of Iran composed by Ferdowsi.

Ferdowsi is globally regarded as one of the greatest and most prominent epic poets.

A few days before Yalda Night, you can feel a special atmosphere in each city and even in the small villages of Iran; streets are more crowded; and you can find a large number of people buying fruits and nuts in shopping centers, preparing themselves to celebrate this night in the best and most beautiful way possible.

Since long times ago, families gather around warm Korsis, reading poems and telling stories throughout Yalda Night. “Korsi” is a short-height square-shaped table, with a heater in its inner central part warming legs and body during the cold nights.

The surface of Korsi is completely covered with a big blanket decorated with traditional rugs called “Jajim” or coverlets such as Cashmere (Termeh cloth), to prevent warm air wasting. A copper tray is put on the table the size of the Korsi.
A lantern/lamp, a Samovar (a metal container traditionally used to heat water for tea preparation, originally from Russia), fruits, nuts, and other meals are all put on that copper tray. This will undoubtedly make for the best opportunity to experience a warm and friendly gathering

On this night, the elderly of the families often narrate stories, read Shahnameh, and use Divan-e-Hafez for fortune-telling.

Iranians are not the only people who celebrate the longest night of the year, some other countries neighboring Iran, such as Afghanistan, Pakistan, and Tajikistan also celebrate this night because these countries belonged to Persian Empire and the customers are similar.

Celebrate Yalda Night with Locals Wherever in Iran

Are you interested in celebrating the longest night of the year with local people in Iran?

Gather together with a group of actual Iranians to hold the feast of winter arrival and rebirth of the sun. Set the Yalda table with handmade tablecloths, and design the table with different fruits, nuts, snacks, Iranian poem books, and Shahnameh. Listen to the stories of ancient Persia and get to know about the national myths. Live a whole long night in a genuine atmosphere and feel at home by sharing your being in the warm Iranian night. 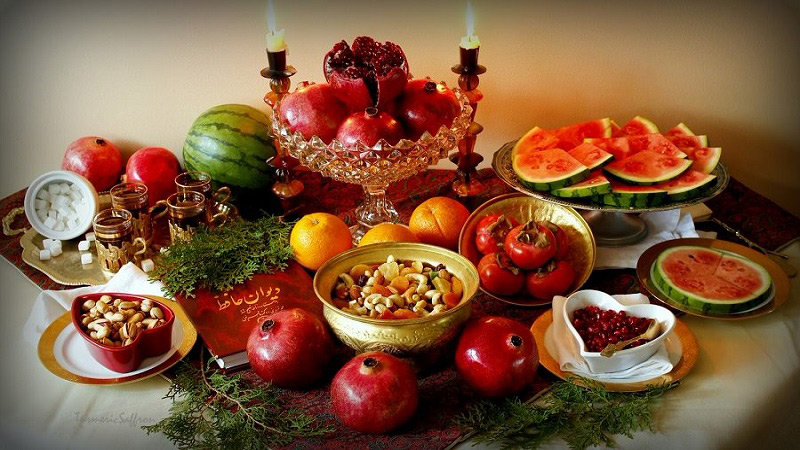 1-Gather with the local people on the last night of the fall at a traditional house or a local Iranian family dinner.
2-Get to know about the stories, rituals, activities, and foods of the Yalda ceremony in an authentic setting.
3-Taste local food, sweets, nuts, and delicacies of Yalda eve.
4-Take part in special Yalda rites, read the best of Iranian poems, get to hear the Iranian mythical stories.