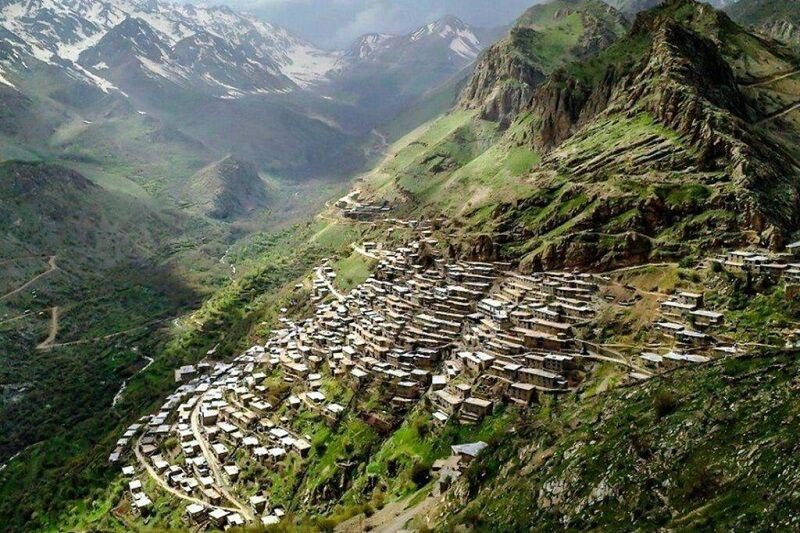 Uramanat Village owns a unique rural texture, architecture, lifestyle and agriculture. A As a prominent example of the integration of man into nature, the inhabitants integrated themselves into nature through the utilization of sharp slopes in agriculture.

Its authenticity and integrity can be seen in three contexts: language and dialect, lifestyle and its social administration that has a historical start point (a bas-relief) that cannot be seen anywhere else.
Uramant or Uraman Takht (also known as Huraman, Avroman, Owraman, Owraman Shahr, and Shehr-e-Avroman) is a village in Uraman Takht rural district, Sarvabad county, Kurdistan Province.
It has been said to be a source of original Iranian and rich Kurdish art and culture from the days of yore. Thanks to the preservation of its heritage, architecture, and a unique traditional religious ceremony, namely ‘Pir Shalyar’, Uraman Takht village is known as one of Iran’s most impressive villages.
The name Huraman is derived from -hura and -man. Man means place or land; and Huraman is thought to mean the “Ahurayi land or the place of Ahura Mazda” or higher divine spirit.
According to the people’s belief, Uraman used to be a big city and of great importance in the past, hence it was known as Takht (meaning throne) or the center of the government.
At an altitude of 1450 meters above the sea level, the village enjoys mild weather in spring and summer, and cold weather during fall and winter. Uraman is a vast and mountainous area of Zagros mountain which includes the entire south of Kurdistan Province, and Uraman Takht village is a part of it.
The village is located on a steep slope facing the northern side of the Uramanat Mountain. Therefore, just like Masuleh village in Gilan province, it has a dense and step-like residential area adding to its beauty and attractiveness.
The roof of each house forms the yard of the upper one, and the walls are made without using any mortar, just by artistically putting pieces of stone on top of one another.
Tourist attractions of Uraman are not limited to the aforementioned.
This region is one of the most fascinating areas in natural attractions, some of which are the large and deep river of Sirvan, Uramanat Mountains, fruit gardens, numerous waterfalls.
This amazing place was registered on the UNESCO world heritage list in the 44th session of the World Heritage Committee, in China’s Fuzhou. Iran is a country that must see and has a lot of beauties and places for traveling and spending time.
NEW UNESCO WORLD HERITAGE SITE IN 2021 FOR IRAN
Cultural Landscape of Hawraman/Uramanat

Iran with 24 UNESCO World Heritage Sites and 2 Natural sites is among the top 10 countries with the most Cultural Heritage Sites in the UNESCO’s World Heritage List in the year 2021.
It is interesting to know that by 2020, more than 1120 sites have been listed on the UNESCO World Heritage and millions of tourists visit these fascinating sites and monuments annually.
As you know, World’s Cultural Heritages belong to the whole world not only to one country.
It’s also worth mentioning that the places listed on this list belong to all humans on earth, regardless of race, nationality, religion, and it is the duty of states and governments to make every effort to protect and preserve these monuments.
In 2021 The UNESCO granted world heritage status to Uramanat of Iran which holds hundreds of villages, 106,000 hectares of land, and 303,000 hectares of surrounding properties, during the 44th session of the World Heritage Committee, which ran through July 31 in China’s Fuzhou.
Stretched on the slopes of Sarvabad county, and shared between the provinces of Kordestan and Kermanshah, the rural area embraces dense and step-like rows of houses in a way that the roof of each house forms the yard of the upper one, a feature that adds to its charm and attractiveness.
Last September, Hessam Mahdi, the representative of the International Council on Monuments and Sites (ICOMOS), announced that the case for the inscription of the Uramanat cultural landscape on the prestigious list had been well prepared and he was “impressed” by the status of the rural landscape.
He made the remarks on the sidelines of a visit to the western province of Kermanshah. “I am proud of being chosen to assess the case and traveling to Iran as I could visit the local people in the region,” he said
Local officials believe that inscription of the property on the prestigious list of the UN body could jumpstart tourism in the region and also look at it as a tool for better conservation of its natural landscapes and unique cultural scenes for the next generations, saying its unique rural texture, architecture, lifestyle, and agriculture is a prominent example of the integration of man into nature.
The Islamic Republic of Iran expects to reap a bonanza from its numerous tourist spots such as bazaars, museums, mosques, bridges, bathhouses, madrasas, mausoleums, churches, towers, and mansions, of which 26 being inscribed on the UNESCO World Heritage list.
Under the 2025 Tourism Vision Plan, Iran aims to increase the number of tourist arrivals from 4.8 million in 2014 to 20 million in 2025.
The latest available data show eight million tourists visited the Islamic Republic during the first ten months of the past Iranian calendar year (ended March 20)