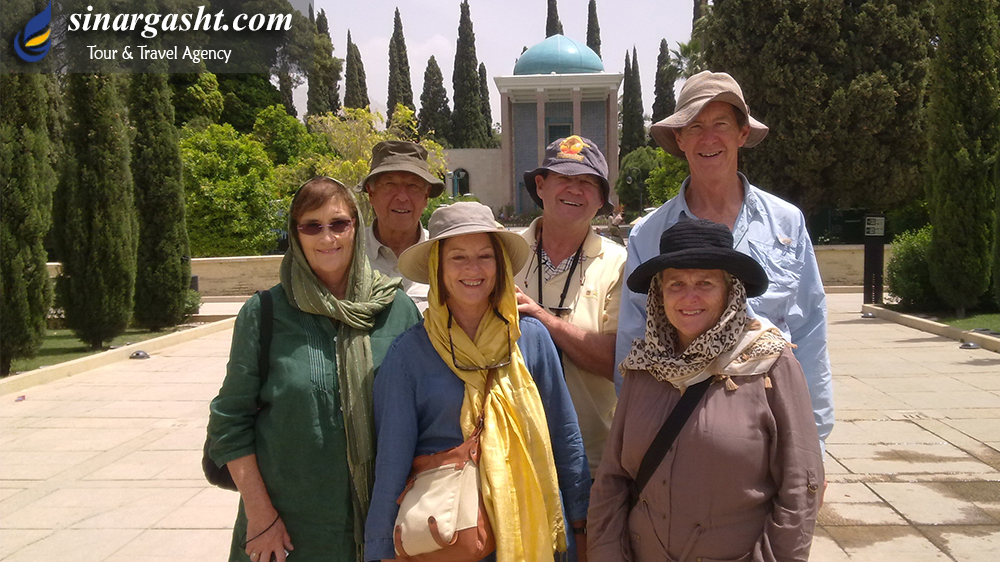 West of Iran has been the birth of the most beautiful love stories such as Shirin and Farhad. Great historical works of art including national traditional music, group dancing, delicious food and pastry are among things you will enjoy there.

Can be the highlight of your life as you will visit beautiful cities such as Tehran, Shiraz, Zeinoddin, Yazd, Isfahan, Hamedan, Kermanshah, Sanandaj, Oranamat, Takab, and Ghazvin. This tour will be an unforgettable trip full of valuable memories. We suggest this tour for spring, summer and at the beginning of autumn, due to the cold and snowy weather of west and northwest Iran.

Upon your pre-dawn arrival in Tehran airport, you will be cordially received by our representative carrying our show card (transfer information) who will transfer you to your hotel. You will have time to rest and relax before our late morning tour of Tehran.

A modern megalopolis prides itself on having unique museums with immense and unrivaled collections and artifacts dating from the earliest onset of history to the present era.
Our late morning tour begins with Archaeological Museum. Next is, having lunch in an Iranian traditional restaurant. Afterward, we will visit the jewels Museum.
At the end of the day, we will get a chance to see a variety of Persian hand-woven carpets and rugs in the Carpet Museum. Stay overnight in Tehran.

A morning visit to Sa’ad Abad Complex which dates back Pahlavi dynasty.

Tehran excursion will end at the Ceramic Museum. Then, we leave the hotel for a tasty Iranian lunch in a traditional restaurant. Afterward, we will transfer to the airport to fly to Shiraz. Stay overnight in Shiraz.

Shiraz is the center of Persian culture and famous as the city of roses, nightingales, gardens, and poetry.

The tour starts by visiting, the glorious Karim Khan palace, the splendid Vakil mosque, Vakil Bazaar and Saray-e-moshir with its splendid architecture and interesting ethnic souvenir shops, and the Nasir Almolk mosque. Next, we will stop for Iranian lunch at one of the traditional restaurants of Shiraz.
This gorgeous city is home to famous poets such as Hafez and Sa’adi and historical sites.

He is one of the great poets who impressed everyone with his mastery. His poems give us a special feeling and the peace in his tomb is really outstanding.

He is a philosopher and mystic poet who is famous as the father of tourism. About seven previous centuries he traveled to different countries and cities. Then he collected all his experiences in verse and rhyme prose in two books named Boustan and Golestan. These two books give you lots of inspiration and information. We will get a chance to pay homage at the tombs of these great poets.

In the evening, we will visit Ali-Ebn-e-Hamzeh and be prepared to marvel at its beauties. We will take a stroll through the Jahan Nama Garden and witness its tall and proud cedars. Finally, we will visit the Delgosha Garden and Khajoy-e-Kermani tomb from where the perspective of the mysterious city of Shiraz will remain in our mind. At night we will have dinner in a restaurant in the northShiraz is the center of Persian culture and famous as the city of roses, nightingales, gardens, and poetry.

Day 4: Excursion to Persepolis and Necropolis

Our visit for today is Persepolis. Founded by Darius I in 518 B.C., Persepolis was the capital of the Achaemenid Empire. It seems that Darius planned this impressive complex of palaces not only as of the seat of government but also, and primarily, as a showplace and a spectacular center for the receptions and festivals of the Achaemenid kings and their empire such as Nowroz.
Next is Necropolis. Opposite the mountain of Rahmat, ten minutes to the north, proudly stands the Necropolis, the magnificent burial place of Achaemenid kings. The site also provides seven bas-reliefs dating back to Elamite and Sassanid periods.

On the way, we will have a few short stops in Pasargadae to visit the most important and majestic monuments there.

Cyrus the Great, great Achaemenian Emperor, (500 years BC) is the oldest historical tomb. the personality of Cyrus the Great will. This was the worshipping place for the followers of several religions and still, it is so. Nearby is a relief of a mysterious winged man and there are many theories as to what it symbolizes.

An ancient city is a place to see historical sites and wonderful desert architecture. Old trees are evidence that appropriate weather and good conditions lead to a long life.
The 4500-year-old cypress tree in Abar Kouh is a marvelous attraction. cypress tree leaves a trace of eternity in the heart and on the mind of all travelers.
Afterward, we will visit Zeinoddin, a Safavid Caravanserai in the heart of the desert which is restored beautifully and received 2 awards from UNESCO in 2005 and 2006.

Mehriz is located 30 kilometers south of Yazd. One of the most important places to visit in Mehriz is Sar Yazd.

It has a castle belonging to the Sassanid era which was used as a shelter in the time of war. Another historical place is a caravanserai in Saryazd which dates back to the Seljuk and Safavid era. After that, we will transfer to Yazd.

The oldest adobe city in the world is surrounded by the 4000m summit of Shirkooh and two majestic deserts, Dasht-e-Kavir and Kavir-e-Loot. This ancient city is furnished with mosques of stunning beauty. The co-existence of the splendid fire temples and the holy sites of different religions astonish every visitor.

Day 7: Morning visiting in Yazd, then driving to Isfahan

Today’s tour includes visiting Dakhmeh (tower of silence, where Zoroastrians leave the dead to be eaten by vultures). we will see the Zoroastrian fire temple. we will also, visit the marvelous Water museum, Jame’ mosque and then, Doulat Abad Garden.
Lunch will be set at a traditional restaurant. Afterward, we will depart for Isfahan. On the way, we will visit the attractive city of Naein.

It is famous as the city of cisterns and possesses around 80 cisterns. We will get a chance to visit one of the oldest and most important mosques of Persian Islamic architecture. Stay overnight in Isfahan. If possible some of the thirty-three bridges will be seen.

Isfahan is the pearl of traditional Islamic archaeology which prides itself on having fascinating historical garden palaces.

Our full-day tour includes the famed Imam Square (Naqsh-e-Jahan), a huge square second in the world to Beijing’s Tienanmen Square. Tour the architectural marvels of Sheikh Lotfollah and Imam Mosques, Aliqapu Palace, Chehel Sutoon and Hasht Behesht Palaces, and also visit one of the most famous bazaars in Iran. Stay overnight in Isfahan.

Isfahan’s Jame’ mosque displays several centuries of historical Islamic evolution. This mosque is a gallery of Islamic architecture in which the progress of architecture from the outset of Islam until recent times is evident. Then we will visit Vank Church which is one of the most beautiful Armenian churches in the world and will undoubtedly capture the attention of every Christian. Our day will conclude with a visit to Monar Jomban, the tomb of a Sufi with its shaking minarets and some historical bridges. The evening is free at leisure.

The sightseeing in Hamedan starts with the tomb of Esther and Mordechai. This is the tomb of Esther the Queen of Susa (the wife of Xerxes of Iran). Mordecai (Mord Khay) was her uncle.
The next place is the Ganj Nameh Inscription. These inscriptions are relics from the period of Darius and Xerxes of the Achaemenid era. They have located 5 km. west of Hamadan at the end of the Abbas Abad Valley, and have been engraved on a mountain.

is a Muslim Persian physician and philosopher, and wrote almost 450 treatises on a wide range of subjects, of which around 240 have survived. In particular, 150 of his surviving treatises concentrate on philosophy and 40 of them concentrate on medicine, Our next step will be the tomb of Avicenna.

Hegmatane in Romance of Persia Tour

The archaeological site dates from the 6th century BC. Kiyakesar Madi and ‘Nabopolasar Baboli’ were responsible for building this structure in 614 BC.

If possible, we will visit Alavid Dome (or Masjid-e Alavian) which is a four-sided interesting 12th-century mausoleum belonging to the late Seljuk period(11/12 century).

Our next site to visit is the tomb of Baba Taher, which is in a park, surrounded by flowers and winding paths. Baba Taher is famous as one of the most revered and respected early poets in Iranian literature.

The next stop is Ali sadr cave which is the world’s largest water cave. It is located about 100 Kilometer north of Hamedan.

On the way to Kermanshah, we will visit Anahita Temple in Kangavar. Then we will visit Bistoon, The UNESCO world heritage This was the site.

In Kermanshah we will visit the Sassanian rock carvings of Tagh-e-Bostan. These bas-reliefs dating back to the Sassanian dynasty(224-651 Ad). Afterward, Drive back to Hamadan and stay overnight.

Day 13: Drive to Oranamat via Sanandaj

Sanandaj is the capital of Kurdistan province. In Sanandaj, you will visit the old bazaar and the Hajar Khatoon Mausoleum. Afterward, we drive to Oranamat Takht village.

we will drive to Takht-e-Soleiman which is located in the northeast of the city. Takht-e-Soleiman was one of Takab’s oldest Zoroastrian fire temples during the Sassanid Dynasty. Afterward, we reach Zanjan. Zanjan is famous for its beautiful handcrafts such as knives, traditional sandals.

Day 15: Drive to Tehran, via Soltanieh and Alamoot

Today we move toward Tehran. We will drive 110 to Zanjan and visit the majestic of Soltanieh Dome (Gonbad Soltanieh). The next adventure will be Alamoot. Near Ghazvin there is a historical castle of Alamoot, which is the unique memorial to the God of Alamoot (Hasan Sabbah).

Afterward, we will drive to Tehran and stay there overnight.

More Tour about Romance of Persia 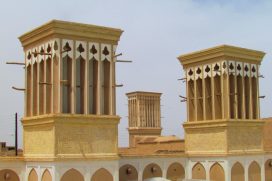 West and northwest of Iran have a diversity of ethnic groups such as Kurds, Turks, and Lors. 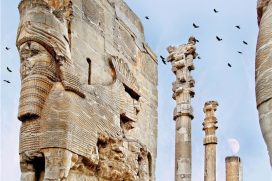 Experience the history and the glory of ancient Persian empire. 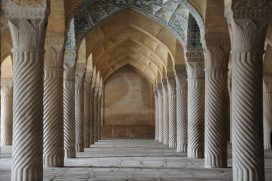 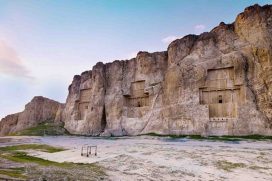 Most beautiful beaches, most lovely ski resorts, starry sky of desert and highest mountain of Iran.