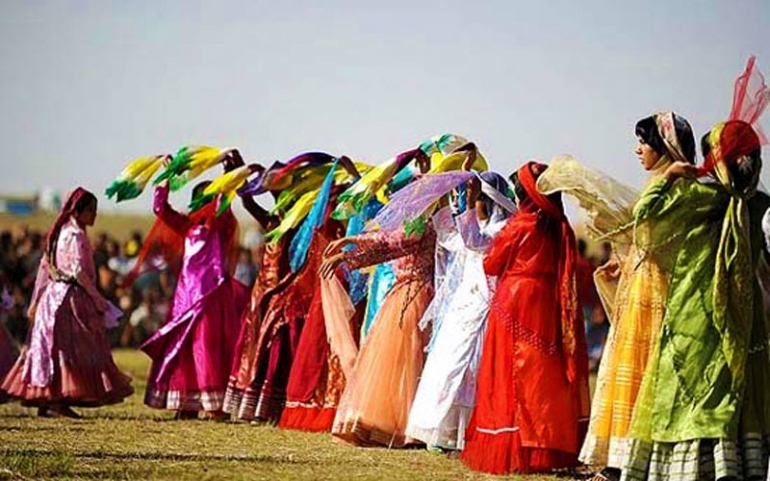 Nomads are the people who migrate from one place to another with their tribe, family and all their belongings seasonally and within a well-defined territory.

Iran Nomads Tour in warm seasons is approximately from May to October. The nomads in warm season, settle down in the colder areas of southwest, west and northwest of Iran.

The agreeable time to visit the Nomads in summer is from May to October and in winter,from October to May.

By the nomad tours, you will have the opportunity to experience rare traditional and rural lifestyle.

Every single component of nomad tribes’ daily life comes from the nature from the raw materials to cook the meals.

Through different parts of this vast territory, wide range of nomad tribes can be found such as: Qashqai, Bakhtiari, Lur, Turkmen and Shahsevan. Although all of the tribes are considered as the nomadic tribes of the glorious Iran, but wide range of differences can be found regards to their customs, ceremonies, language, beliefs and etc.

The Bakhtiari tribe is one of the largest of all the nomadic tribes in southwest of Iran and a subgroup of the Lurs.  They speak the Bakhtiari dialect belonging to the Lurish language. Bakhtiaris are a hardworking tribe, facing numerous obstacles every day and overcoming of countless difficulties in the Zagros ranges.

Bakhtiaris primarily inhabit Chaharmahal and Bakhtiari and eastern Khuzestan, Lorestan, Bushehr, and Isfahan provinces. In Khuzestan, Bakhtiari tribes are concentrated primarily in the eastern part of the province. the story of the migration of Bakhtiari tribe from winter quarters in Khuzestan to summer quarters Chahar Mahaal. The Bakhtiari nomads move between a summer abode (Yeylaq) (first of June to September) in the high mountains (summit, Zard Kuh 4,548 m) and a winter abode (Qeshlaq) (around February to the middle of march) in the western foothills adjoining the Khuzestan plain

The Bakhtiari people are mainly from two tribal divisions, Chahar lang (English: Four Shares) and Haft Lang (English: Seven Shares). Lang word in bakhtiari dialect means “share of tax or inheritance”. each controlled by a single powerful family. The overall Khan alternates every two years between the chiefs of the Chahar Lang and the Haft Lang.

The tribe’s main economic activities are primarily breeders of sheep and goats, which provide most of their cash income.

The Shahsavan tribe is in the northeastern Azarbaijan province, Shahsevans were organized by Shah Abbas I in the 17th century as a militia from tribes of diverse origin. In turn, Shah Abbas granted the Shahsavan lands in northeast Azerbaijan for summer and winter pasturage.

Mainly Turkish speaking, they were used to put down rebellions of other tribes. They were divided between Iranian Azarbaijan and the Russian or former Soviet Azarbaijan after the occupation of part of our country by the aggressive Russian.

They migrate between their winter quarters, qishlaq, in the Mughan steppe of Azerbaijan, and their summer quarters, yeylaq, around Mount Sabalan, approximately one hundred fifty miles to the south. The nomads usually spend three to four weeks covering the 150 miles between the winter and summer quarters. For the migration, several camps form a caravan consisting of 30-60 tents. Travelling merchants visit the Shahsavan frequently, selling cloth and household utensils.

Qashqai is one of the nomadic tribes with Turkish origin, and almost all of them speak a Western Ghuz Turkish dialect which they call Turk.

Historians believe that the arrival of our Tribes in Iran coincided with the conquests of Jengis Khan, in the thirteenth century and after that .For centuries they lived on the lands surrounding Ardebil, but, in the first half of the sixteenth century they settled in southern Persia, Shah Ismail having asked our warriors to defend this part of the country against the intrusions of the Portuguese. Thus, Qashqai Tribes came to the Province of Fars, near the Persian Gulf.

They mainly live in the Iranian provinces of Fars, Khuzestan, Kohgiluyeh and Boyer-Ahmad, Chaharmahal and Bakhtiari, Bushehr and southern Isfahan, especially around the city of Shiraz and Firuzabad in Fars.

Nomadic Qashqai travelled with their flocks twice yearly to and from the summer highland pastures north of Shiraz roughly 480 km or 300 miles south to the winter pastures on lower (and warmer) lands near the Persian Gulf, to the southwest of Shiraz.In summer, the Qashkai flocks graze on the slopes of the Kuh-è-Dinar; a group of mountains from 12,000 to 15,000 feet, that are part of the Zagros chain. In autumn the Qashkai break camp, and by stages leave the highlands. They winter in the warmer regions near Firuzabad, Kazerun, Jerrè, Farashband, on the banks of the river Mound, till, in April, they start once more on their yearly trek.

Lurish is a Western Iranian language continuum spoken by the Lurs in Western Asia. Lurish language forms fiv Laki and the Southern Lurish.
Lur women have much greater freedom than women in other groups within the region. The women have had much freedom to participate in different social activities, to wear female diverse clothing and to sing and dance in different ceremonies.[34] BibiMaryam Bakhtiari, and QadamKheyr are two notable Lurish women from Iran.[35][36] Lurish music, Lurish clothing and Lurish folk dances are from the most distinctive ethno-cultural characteristics of this ethnic group.

Luri is divided into northern and southern dialects. The northern dialect is spoken in Luristan, several districts of Hamadan (Nahavand, Towisarkan) and by the inhabitants of south and southwest Ilam and northern part of Khuzistan province.

The southern dialect is spoken by the inhabitants of Bakhtiari, Kuh-Gilu-Boir Ahmed and also in the north and east of Khuzistan, in the Mamasani district of Fars, and also in most areas of Bushehr province.

The Turkmens are a nation and Turkic ethnic group native to Central Asia, primarily the Turkmen nation state of Turkmenistan and are exist in Iran, too. They speak the Turkmen language, which is classified as a part of the Eastern Oghuz branch of the Turkic languages.

The Turkmen largely survived the Mongol period due to their semi-nomadic lifestyle and became traders along the Caspian, which led to contacts with Eastern Europe. For centuries the Turkmen lived as nomadic herdsmen. In more recent years, however, many have changed to a “semi-nomadic lifestyle,” living in permanent homes as well as in tents. Nearly two million Turkmen can be found living along the northern edges of Iran, just south of the Turkmenistan border, in Golestan and Khorasan provinces. Turkman Sahra located south of the Atrak River, it is a slightly hilly area, sloping gently towards the Caspian Sea. Its climate ranges from moderate in winter to hot and dry in summer, which changes into a humid Mediterranean type around the Caspian Sea. In Iran lived next Turkmen tribes — Yomut, Goklen, Īgdīr, Saryk, Salar and Teke. Social and cultural differences can be observed due to their historical background and different means of subsistence, despite their great similarities.

Turkmen lifestyle was heavily invested in horsemanship and as a prominent horse culture, Turkmen horse-breeding was an ages old tradition. Many tribal customs still survive among modern Turkmen. Other customs include the consultation of tribal elders, whose advice is often eagerly sought and respected.

The music of the nomadic and rural Turkmen people reflects rich oral traditions, where epics such as Koroglu are usually sung by itinerant bards.

The Kurds or the Kurdish people , are an ethnic group in the Middle East.

Kurdish is a collection of related dialects spoken by the Kurds. It is mainly spoken in those parts of Iran, Iraq, Syria and Turkey which comprise Kurdistan. Kurdish holds official status in Iraq as a national language alongside Arabic, is recognized in Iran as a regional language, and in Armenia as a minority language.

Most Kurds are either bilingual or multilingual, speaking the language of their respective nation of origin, such as Arabic, Persian, and Turkish as a second language alongside their native Kurdish.

The Kurdish dialects according to Mackenzie are classified as:

The Kurds are culturally, historically and linguistically classified as belonging to the Iranian peoples.Kurdish culture is a legacy from the various ancient peoples who shaped modern Kurds and their society. As most other Middle Eastern populations, a high degree of mutual influences between the Kurds and their neighbouring peoples are apparent. Therefore, n the whole, Kurdish culture is closest to that of other Iranian peoples.

In general, Kurdish women’s rights and equality have improved in the 20th and 21st century due to progressive movements within Kurdish society.

Is renowned throughout the world, with fine specimens of both rugs and bags. The most famous Kurdish rugs are those from the Bijar region, in the Kurdistan Province. Because of the unique way in which the Bijar rugs are woven, they are very stout and durable and exhibiting a wide variety, the Bijar rugs have patterns ranging from floral designs, medallions and animals to other ornaments. They generally have two wefts, and are very colorful in design. Another well-known Kurdish rug is the Senneh rug, which is regarded as the most sophisticated of the Kurdish rugs. They are especially known for their great knot density and high quality mountain wool. They lend their name from the region of Sanandaj.

Some historians maintain that the first Arabian tribes migrated to Khuzistan, a section in south-west of Iran where they now live, in the early centuries AD, probably moving in from the Arabian Peninsula.

Arabian tribes are scattered in an area between the Arvandroud and the Persian Gulf in the south and Shush in the north. Their territory is located to the west of the Bakhtiyari territory, and some of them even mingle with the Bakhtiyari tribe.

The most important of the Arabian tribes in Iran is the Bani-Kaab, which is also the largest. Its numerous clans inhabit the Minoo Island, Khorramshahr, Shadegan on both sides of the Karun river, up to around Ahwaz to the north. The House of Kassir people are inhabitants of the city of Ahwaz, west and south of Dezful river and between the Dezful and Shushtar rivers. Other are: Bani-Lam, Bani-Saleh, Bani-Torof, Bani-Tamim, Bani-Marvan, Al-Khamiss, Bavi and Kenane.

The Arabians have retained their Arabic language and many of their old customs, but they have lost some of their ethnological characteristics. Information on the size of Arabian population in Iran is not available. One reason for this is the extensive migration of the people from Khuzistan to other parts of Iran following the Iraqi invasion in 1980. The population census taken in 1976 put the size of the Arabian tribal population at around 300,000.

The Baluchis reside mainly in Baluchestan, which is a dry region in the south-eastern part of the Iranian plateau. It extends from the Kerman desert to the rest of Bam and Beshagard mountains, and to the western borderline of the Sind and Punjab provinces of Pakistan. Baluchestan is divided between Iran and Pakistan. Iran and Pakistan had a dispute concerning the border dividing the two parts of Baluchestan, which was resolved by an agreement in 1959. The Iranian Baluchestan is a part of the Sistan and Baluchestan province. Its important towns are Zahedan, Zabol, Iranshahr, Saravan, Chahbahar, etc.

Historically, the Baluchis moved to Makran from Kerman to flee an expedition of the Seljuk in the 11th century. At the time, the Baluchis were nomads. They have never had a centralized government and have been living under a tribal system.

Baluch is the title of several tribes, a small number of which live in the Republic of Turkmenistan. The Baluchis speak Baluchi, which is a West Iranian language of the Indo-European family of languages that has been influenced by the eastern Iranian dialects. It has two branches of northern (Sorhadi) and southern (Makrani) Baluchis. The Iranian Baluch tribes are divided into a number of clans. The most important are the Bameri, Balideh, Bozorgzadeh, Riggi, Sardaar Zaie, Shahbakhsh, Lashari, Mobaraki, Mir Morad Zaie, Naroyee, Nooshsiravani, Barohooyee, Baram-Zehi, and Shir-Khanzayee tribes. The Iranian Baluchis are mostly of the Hanafi sect of the Sunni faith.